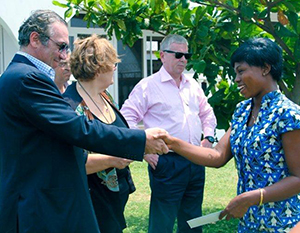 On Friday 13th July, the Tsakos delegation consisting of Mr N P Tsakos, Mr A Rozakis, Mr T Lainas, Mr D Bryce and the undersigned after our meetings with officials in Tema, proceeded to the Tema New Town area.

We drove a different route to that of the Master and Chief Eng of NIPPON PRINCESS who sent such a touching message on their visit – going past industrial areas, we entered an area near the aluminium factory of VALCO, where small mounds of earth appeared where people search for charcoal.  We saw in the distance the port prepared by the Chinese and went through various small flooded areas entering Tema New Town – we drove past shacks, fish smoking areas and paid a visit to Winners Basic School – there in a ramshackle hut we saw upwards of 120 children being taught in the most primitive conditions but studying French, Social Studies etc.  Each child rose as we entered the class room saying “YOU ARE WELCOME” and when we said thank you and how are you the stock response was “WE ARE FINE AND YOU?”.  The Head Master Ike who is severely disabled showed us around – he has no use of his legs and walks on his arms.  It is obvious that the children are learning under these primitive conditions and it is a beacon of hope in the area.  Mr NPT promised that he would offer some help .  Refreshments were offered to the school. 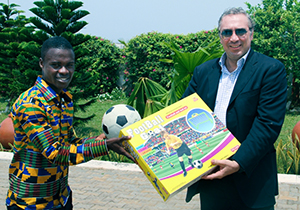 Recent help given to the school consisted of repairing the roofing which was leaking, making a cement floor, provision of 2000 books and building toilets which are yet to be completed.

After this, we went to the St Nicholas Orthodox Church and School – as we entered the final lane prior to the school we were met with a row of children waving Greek and Ghanaian flags – the flag of the Tsakos Group, the Orthodox flag, Greek and Ghanaian flags were also flying – we then met the Chief of Tema New Town, his Elders and our dear crew from BLACK STAR and NIPPON PRINCESS, the latter who have been an ardent supporter of our efforts at the school and church.

The church was visited, candles lit, and we then proceeded to the school.  The Chief was there and all visitors sat down.  The children recited poems such as ‘If you give a man a fish he will have something eat If you teach him how to fish, he will always have food’. Other such poems, songs were recited and the children were very happy.

Mr N P Tsakos made a speech and offered Cedis 5000 to the educational development fund of the area which was accepted by the Chief. The children made a presentation to NPT of a hand worked card for each of his children and one for the Tsakos family and wood carvings for each member of the delegation. 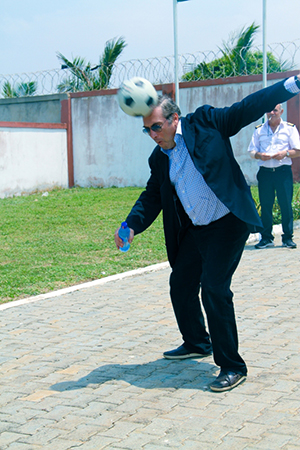 Mr N P Tsakos made presentations to each member of the teaching staff and thanked them for their efforts. He was also interviewed for the promotional DVD to be introduced for the support of the school. Thereafter we proceeded outside and N P Tsakos unveiled a slide, merry go round and see saw, much to the delight of the children. After that N P Tsakos had a friendly passing of a football with one of the guardians of the school Innocent a potential football player and it was difficult to know who was better.

The project in practical terms owes its existence to the initial vision of N P Tsakos who wished that seafarers would be able to see a beacon of hope whilst at anchorage and during the consecration of the Church suggested a further use for the foundation of a separate building.  The initial funds provided were from the Maria Tsakos Foundation  and donations from individuals. Further land has been donated for the next stage of the school. Thereafter with massive support from Capt Kappas who completed the project of building a beautiful two storey school and accommdation and doctors consulting room, we were able to offer a ray of hope to these neglected, poor children who had no hope of ever going to school and no hope of getting out of the poverty trap of their parents.

The aims of this school are to take the children through the whole education process and that by starting at an early age, we will arm them with the means to have an improved life with choices and become responsible adults.  It is a mammoth task ahead and will rely heavily on the involvement and support of the MARIA TSAKOS FOUNDATION, the Tsakos family, the vessels of our fleet and public and private individuals both in Greece and abroad. It will not be only a question of funds, but time, effort and volunteers and a chance for those of us lucky enough not to have been borne in such poverty to give back to the community, whether it is this charity or others nearer to home and nowhere could it be more true than that of Tema, New Town.

To fully understand the situation one has to visit and see with their own eyes and then you will believe in our vision.

We use cookies on our website to give you the most relevant experience by remembering your preferences and repeat visits. By clicking “Accept”, you consent to the use of ALL the cookies.
Cookie settingsACCEPT
Manage consent

This website uses cookies to improve your experience while you navigate through the website. Out of these, the cookies that are categorized as necessary are stored on your browser as they are essential for the working of basic functionalities of the website. We also use third-party cookies that help us analyze and understand how you use this website. These cookies will be stored in your browser only with your consent. You also have the option to opt-out of these cookies. But opting out of some of these cookies may affect your browsing experience.
Necessary Always Enabled
Necessary cookies are absolutely essential for the website to function properly. This category only includes cookies that ensures basic functionalities and security features of the website. These cookies do not store any personal information.
Non-necessary
Any cookies that may not be particularly necessary for the website to function and is used specifically to collect user personal data via analytics, ads, other embedded contents are termed as non-necessary cookies. It is mandatory to procure user consent prior to running these cookies on your website.
SAVE & ACCEPT